The elementary circuit: A battery and a resistor

We'll begin our study of circuits with the most basic of all circuits, a battery and resistor connected in series. While this circuit isn't very practically useful, you'll find that you'll be using it often as you analyze more complicated circuits.

First we need to have some basic definitions, so let's go.

We'll be making an using circuit drawings. As the name suggests, a circuit is always a loop of some kind, always of wire(s) and circuit elements, which might include things like batteries, switches, resistors, capacitors, inductors, diodes, and other elements you'll learn about later. Don't worry what all of these are just now.

In our circuits, circuit elements will be connected by wire, which we will assume, for all practical purposes, to have zero resistance.

We'll write a resistor as a zig-zag with its resistance next to it, like this 10 Ω resistor:

Notice that the battery is polar. The positive (+) end is indicated by the taller vertical line.

Diagrams will help. Here are three resistors connected in series. The arrows show the direction of current, though it could run in the other direction just by turning the battery around.

The simplest circuit consists of a battery and a resistor connected in series, like this:

Now this circuit doesn't really do much, except maybe heat up the resistor and drain the battery, but you will see that understanding it will be immensely helpful in analyzing much more complicated circuits.

You know that what's moving in electric circuits is electrons, which carry a negative charge. The trick is that the people who first discovered and explored electricity,

including Benjamin Franklin, called the charge of the particle that moves in circuits "positive" (because they didn't know), and we're stuck with it.

In DC circuits, we always assume that what's moving is a positive particle, originating from the positive pole of a battery and terminating (seeking) the negative pole. It's technically wrong, but it turns out not to matter in the least, so I'd get used to it.

Here's that circuit with the proper currents sketched in:

In circuit analysis, we always assume the current to be the movement of positive charges.

We have a closed circuit with a 10Ω resistor and a 5V battery, so we can rearrange Ohm's law to calculate the current:

and the current is

: What could we do to this circuit to reduce the current?

A new circuit: resistors in series

Now let's analyze our first circuit with two resistors. For reasons that will become apparent when we're done, this circuit is called a voltage divider. Here's one: 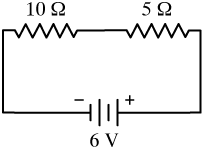 This circuit consists of 10 Ω and 5 Ω resistors wired in series with a 6V battery. When we encounter series resistors like this, we need to find the total resistance, which is just the sum of the two resistors.

The total resistance of n resistors in series is just the sum of all n resistances, or

Now it's easy to calculate the current through our circuit,

Now that our equivalent circuit has helped us to calculate the current, we need to go back and calculate the potential drops across each resistor.

They are of different sizes, so some part of the total voltage will be dropped across each one. We use Ohm's law in the form V = IR twice:

That's everything there is to know about this circuit: We know the current throughout, the voltage gain and all of the voltage drops.

We call the circuit above a voltage divider because it can be used to divide a single potential increase into smaller ones. Imagine you have an electronic device with a 12V battery, but inside of it are two separate circuits, each of which needs a different power source, say 8V and 4V.

The circuit below would get the job done:

The red wires represent volt-meters. Volt meters are capable of determining a potential difference across two points, like pairs A-B and B-C in the voltage divider, without significantly affecting the circuit. If you wanted a 4V potential increase, you'd use points A and B like the terminals of a 4V battery, and if you needed 8V, you'd use points B and C as terminals of an 8V battery. The 100 Ω and 200 Ω resistors could be changed to provide either different voltages or more or less current.

A common tool of real circuit building and analysis is the digital multi-meter. A multi-meter is capable of measuring potential, current, and many other characteristics of both DC and AC circuits. It's a handy tool to have around, whether you're working on sophisticated electronics or wiring your house.

A multi-meter has what we call a high internal impedance or resistance. Because it's resistance is so high, it doesn't really draw too much current from a circuit in order to make its measurements. That's good because you'd like to be judging your circuit on its own merits, not as changed somehow by the meter.

It's a really good idea for you to get to know a multimeter like this one so that you can use it effectively. 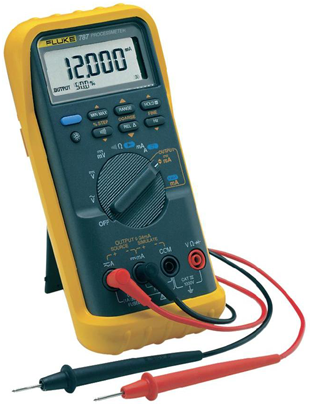 Here's a circuit with three resistors in series. The principles are all the same. Our goal is to 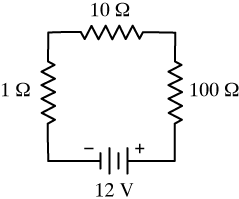 Now the total resistance will be 1Ω + 10Ω + 100Ω = 111Ω. Then we use that resistance to calculate the current, which will be the same throughout this circuit. Before we do that, which resistors will contribute the most and least toward limiting the current in this circuit?

So our current is

By the way, you should be getting good at recognizing that milli = 1/1000, so 0.108 Amps is 108 mA. Milliamps is a unit used frequently in circuit analysis and other fields.

Now we use that current to find the voltage drops across each resistor, remembering that they should sum to 12V: 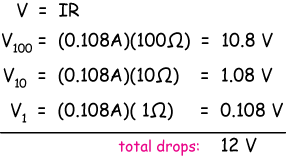 You can see that for resistors wired in series, the voltage drop is proportional to the resistance.

The idea of replacing a complicated circuit by a simpler one for the purpose of analysis is used often, and it has a name, Thevenin's theorem. The simpler circuit is often called the Thevenin's equivalent circuit.

Any circuit consisting of resistors and batteries can be replaced for analysis by a series with a single resistor and a single battery.

A circuit with resistors in parallel

Here is our first example of a simple circuit with two resistors wired not in series but in parallel.

Circuits are often written like this and it's up to you to recognize that they're parallel and analyze them accordingly. But it might be helpful to re-draw such a circuit like this:

Now it's much more plain to see that the two resistors are wired in parallel, and are acting more or less like a single element in the circuit. The current () leaves the battery, splits at the node, some traveling through each resistor, and joins back together at the second node to return to the battery.

More on that later, but the total resistance of our two 100 Ω parallel resistors would be:

Now that's worth thinking about. The total resistance is less than either of our two resistors. It's because the current gets to split into two branches. Think of it as a garden hose being choked into a narrower section. Now put another of those sections in and, no matter how narrow they are, the flow will improve.

Now we can write an equivalent circuit consisting of a 12 V battery and a 50 Ω resistor:

Now the important thing about resistors in parallel is that the voltage drop across a group of parallel resistors is always the same.

So if we go back to our original circuit,

In fact, in this case, because the resistances are the same, we'd expect each current to be half of 240 mA or 120 mA, ... but let's calculate it just for drill:

So in this circuit, the current is limited by the resistors to 250 mA. 250 mA of current leaves the battery, divides in half at the first node, with 120 mA passing through each of the 100 Ω resistors. These currents join at the second node to complete the circuit at the battery.

Notice that a simple parallel circuit like this can act as a current divider.

Now let's try a more complicated parallel-resistor circuit. This one has three resistors with different resistances.

Once again, it might be useful, at least for now, to re-visualize this circuit like this so you can see that those three resistors are in parallel, and that the current will split between them (though un-equally this time).

The first thing we do is to calculate the total resistance. Using the parallel resistor equation, we have

Finally, we ought to note that we don't really know any of those resistance values well enough to express the total resistance to the 10,000ths place, so we should just round it to

Now we have our equivalent circuit:

Now we can go back to our original circuit and calculate the currents through each of the parallel resistors. First, we should think about what to expect: The most current should flow through the 1Ω resistor, the least through the 100 Ω resistor. We'll call the currents I1, I10 and I100, respectively. 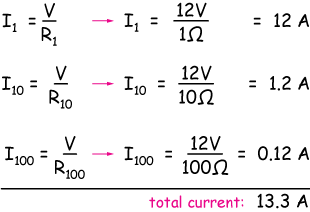 Notice that the current, 13.3 A, calculated this way is the same as that which we calculated using the total resistance. These circuits are satisfying because when you've got everything right, it's all self-consistent.

OK, so that's it for very basic series and parallel resistor-battery circuits. Here is a summary of the steps we took to analyze these circuits:

In the next section we'll look at resistor-battery circuits with a mix of series and parallel resistors. They're a little more complicated, but if you take the time to master the problems below, you shouldn't have any problem making the leap.

Solve for all voltage drops and currents everywhere in these DC circuits: