Thinking about current and potential in terms of energy

Hopefully by now you've read through the sections on electric current, resistance, potential and at least ciruits-1, or you're already pretty familiar with electric circuits. Now we'll explore one more important property of electric circuits and circuit elements, the idea of power.

Power is the rate at which energy (unit = Joules, J) is transferred through a circuit or a circuit element like a resistor. Remember that kinetic energy, work and potential energy are equivalent and interchangeable. The unit of power is the Watt (W). One Watt (it's capitalized because it's a person's name) is one Joule per second: 1W = 1J/s or 1J·s-1.

Now recall that electric potential is potential energy divided by charge, so if we multiply potential (voltage) by charge and divide by time, we get

Now notice that q/t (charge in Coulombs divided by time in seconds) is current, so we have

which gives us the most convenient definition of power for electric circuits, power = voltage multiplied by current.

While we're here, let's use Ohm's law, V = IR to find two other expressions for power in circuits. In the first, we'll replace the potential in the power equation with IR from Ohm's law:

For the second, we'll solve Ohm's law for the current and substitute for current in the power equation:

Power is the rate at which energy is transferred through an electric circuit.

Power is electric potential multiplied by current: P = VI . The unit of power is the Watt:

Work done on and by circuits

When current flows through a DC circuit in the "natural" direction, that is when electrons originate from the negative pole of the battery, flow through the circuit and terminate at the positive pole, the battery does work on the circuit elements. For example, power can be dissipated in resistors by heating them up.

When current flows the other way, we say that the system is doing work on the circuit, perhaps charging the battery, if that's chemically possible.

Notice that here I'm talking about actual negatively charged current carriers (electrons). Remember that in circuits, for historical reasons, we usually refer to a positive current, and that we don't lose anything by doing so.

A real resistor like this 100 KΩ one (the colored bands are a code for the resistance value) can handle only a limited amount of power. A circuit designer needs to know what that limit is or else she could damage the resistor and possibly the circuit.

Power is dissipated in resistors mostly by heating them. This is called resistive heating.

Let's look at a simple parallel circuit and calculate how much power is dissipated by each resistor. Here's the circuit:

Now the total resistance of the two parallel resistors is

The current through the circuit is

So we need to be able to handle 1.44 W, but it would be wise to over-design a little bit. I would probably use resistors rated to handle 5 W in this circuit.

If you've just built a sophisticated and expensive electronic circuit, it makes sense to protect it from damage. One of the most common forms of damage to a circuit is having too much power dumped through it. Think of a sudden surge in the power supply in your home. 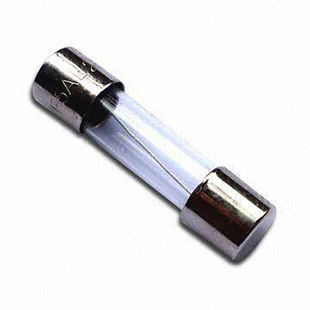 For this kind of protection, we use fuses, circuit elements with something like a thin wire that will burn through and break if more than a limiting amount of power passes through it. One such fuse is shown in the picture.

It has points of electrical contact at both ends and some kind of mechanism for breaking the circuit if too much power passes through it.

The most common symbol for a fuse on paper looks like this. The power rating is generally written below.

Other examples of circuit protection devices include more sophisticated electronic versions, like the ground-fault interrupter plugs in your kitchen or bathroom (that protect you from electrocution around water), or the circuit breakers in your fuse box at home or work.

You can see high-voltage transmission lines like this all over the world. They're how we transport generated electricity over long distances to get to houses and businesses.

The idea of power loss in transmission over long distances is crucial here.

Let's say that we generate one megawatt of electricity at a power plant and we want to transmit it 500 miles. It will be used at a potential of 240 V, so we'll transmit it at that voltage. That means we'll need a current of over 4000 Amps:

Rearranging to solve for the current gives us

That's a lot of current!

Now we can use this current to calculate the power loss due to heating of the wire. According to the Aluminum Association, the resistance of one mile of 1-inch diameter aluminum wire with a steel core (typical for high-voltage transmission) is about 0.145 Ω, so the resistance of 500 miles of this wire would be (500 mi.)(0.145 Ω/mi.) = 72.5 Ω.

The power lost in heating that wire would be

Well, that's more than the power we were trying to transmit, so it means that we wouldn't get any electricity at all on the other end of the wire.

Now the power loss would be 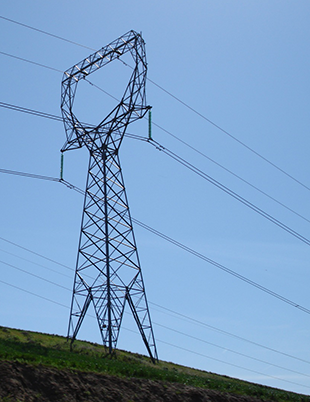 which is about 0.01% of the power transmitted. Hopefully you can see why transmitting power at high voltage and low current is the way to avoid transmission loss due to heating of the wire.

Now in practice there are other sources of loss in our power distribution grid, including corona discharge, a phenomenon where, at high voltage, electrons can just jump off of the wire, sometimes causing a bluish glow or crackling of the lines in wet or snowy weather.

Hey, notice that I did not calculate the power loss with P = V2/R. That's because the V in that equation would be the voltage drop over the 500 miles of transmission, which is not 735,000 Volts. Most of that drop is accomplished by "stepping" the voltage back down at the end of the transmission process using a step-down transformer. $P = I^2R$ is the equation to use here because the current is the same throughout the wire.