Solving for x – the essence of algebra

Solving for x means isolating x (or whatever the variable of interest – it doesn't have to be called x) – on one side of the equal sign (it doesn't matter which).

The way I like to think about the process of solving for x is that I need to "peel away" everything that's in some way "stuck" to it, in order to come up with an equation, at the end, that says "x = (something)".

Let's discover how to do this with examples. First the easy stuff, then we'll do more difficult problems.

I'll only give some basics here. As you learn more about algebra, you'll be able to solve for variables in many other more interesting and challenging situations.

Here's a little cartoon showing what I mean. Our job will be to clear all of the junk away from x in order to see what it really is. 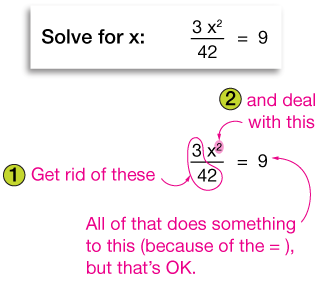 For our first example, we'll solve for x when some number is added to it. Here's such an equation:

What needs to be done to isolate the variable x on the left side is to "move" that 3 over to the right. That's accomplished by subtracting a 3 from both sides. Remember, we have to do the same thing to both sides, unless it doesn't have an un-balancing consequence, like adding zero or multiplying by 1.

Until you get used to doing this kind of small thing in your head, you might want to write it out like this:

Now it's just some arithmetic to get the answer:

You can check to see if this is the correct value of x, by simply substituting 6 for x in the original algebraic equation:

Let's do the same kind of equation, but this time x has something subtracted from it. Right away we know that the method for solving this problem is the same, because subtraction is just addition of a negative. Here's the problem

We need to get rid of the 8 on the left by "moving it" to the right side. It is subtracted from x, so we use addition to move it to the right.

Then the final arithmetic to get the value of x:

What about if x is multiplied by something.? Well, it's not that different. We just get rid of the multiplier using the inverse operation of multiplication, division. Here's our example:

You can write it out like this, and "cancel" the 3's on the left:

Remember that "cancelling" is just understanding that 3/3 = 1. Then just do the division on the right (12/3) to get the solution:

Once again, we can plug our value for x into the original equation to check it:

The situation is very similar when x is divided by a constant. Here's an example:

x is divided by 7. The inverse operation of division is multiplication, so we'll multiply both sides of the equation by 7 to move that 7 to the right side:

Looking back at the original equation, we see that 14 divided by 7 is 2, so our answer is correct.

Now let's do some combinations of these moves. In this example the variable x has something multiplying it and something added to that:

We'll need two steps to liberate the x this time. Do the easy one first, and add the 5 to both sides to move it to the right. Then "divide away" the 4.

First the addition to move the 5:

Then divide both sides by 4, canceling the 4's on the left

and complete the arithmetic.

I'll leave the answer like that. I think it's unfortunate that this kind of fraction has been called "improper." There's nothing wrong with it, and in fact in mathematics, it's preferred over the compound fraction 4-½.

This time we'll need to move the three (first – it's the easiest) by subtraction, then the 4 by multiplication (the inverse of division).

Here's how the 3 gets moved:

And here we get rid of the 4 on the left to isolate x:

And the result is:

Notice that in the last two examples, we chose to do the subtraction and addition parts before the addition or multiplication. Let's try one of those again:

But this time we'll divide by the 4 first, then do our addition to get x alone. First the division, noting that in this case we have to divide all three terms of the equation by 4:

which is the same result we got above. But ... it was a bit more cumbersome than just doing it the easy way from the beginning. These can get more complicated, too, so it's important to get the order right.

You know about order of operations (we gave it the acronym PEMDAS) if you read the algebra basics section, and it turns out you can't go wrong in solving for x if you just reverse it: "." That means to do the subtraction and addition first, then the division and multiplication, then the exponents and what's inside parenthesis last. Check out examples 5 and 6 above and you'll see that's exactly what we did.

I like to think of solving for x in this way as "picking the low-hanging fruit" first. I do what's easy first, usually addition and subtraction. I keep peeling layers away in this way until I have x isolated.

What if the variable is in the denominator?

This kind of problem can cause all kinds of confusion, but the basic procedure is easy to remember.Here's the problem:

There's one thing that really needs to be done in such a problem, and that's to get the variable out of the denominator. Always remember that:

To remove x from the denominator, we multiply both sides by x. The x's on the left will cancel (x/x = 1), and the x on the right is now in the numerator of 8x.

Now it's a straightforward process to isolate x on the right side:

You can check this answer in the original equation if you remember that dividing by 1/8 is the same as multiplying by the reciprocal of 1/8, which is 8.

Solve for x in each of the equations below: 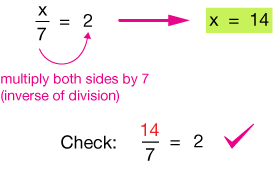 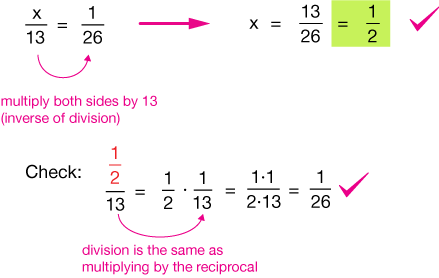 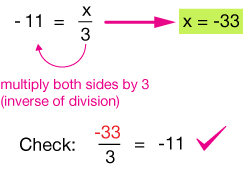 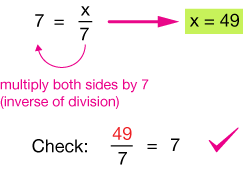 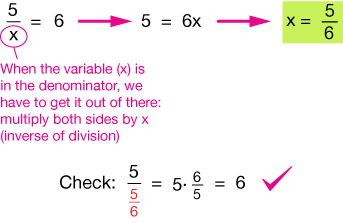 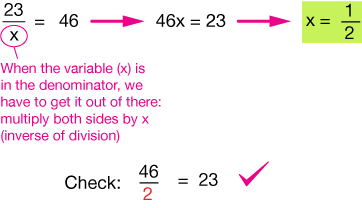