The force produced by springs

Hooke's law says that the force produced by a spring is proportional to the displacement (linear amount of stretching or compressing) of that spring:

The diagram defines all of the important dimensions and terms for a coil spring. For each mass hung on it (the mass could be zero), a spring has some natural length, at which it is neither compressed (shortened) or extended (lengthened). At that point, the upward force produced by the spring is exactly balancing the gravitational force on the mass and spring (remember that the spring itself has mass).

If the spring is strong or stiff, k will be large, and k will be small for a weak spring. 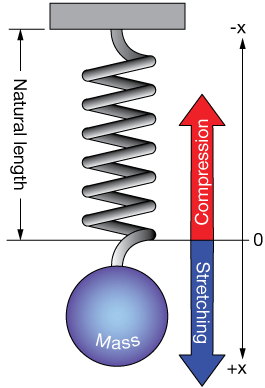 Hooke's law is a linear relationship 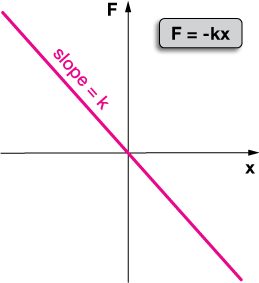 In general, for any spring, Hooke's law is only good over a small range of motions. We know from experience that it's quite possible to extend a spring so far that it becomes damaged and really isn't the same any more. 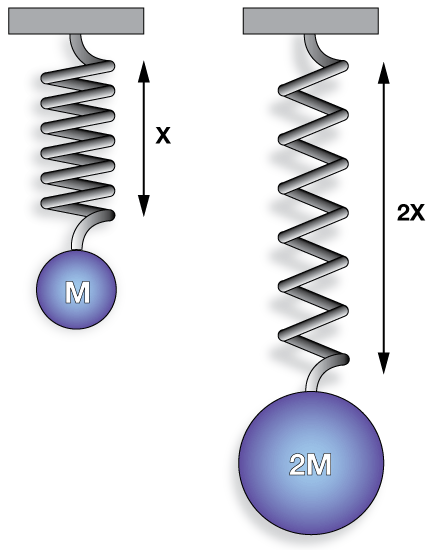 Calculate the force constant of a spring

Imagine that we have a spring and a way to measure force, like a scale (which is often just another spring, but one that is well-calibrated). Imagine that nine measurements of the spring force are measured at various spring lengths, including the natural length. Here's the data:

The units of length are centimeters and force is measured in Newtons (1 N = 1 Kg·m·s-2).

Negative values of x indicate compression of the spring and positive values are extension. Notice that at x = 0, where the spring is neither compressed nor extended, it exerts no force.

We'd like to calculate the force constant, k, using Hooke's law, F = -kx. We could calculate nine different force constants and average them, but a better way is to plot the data. 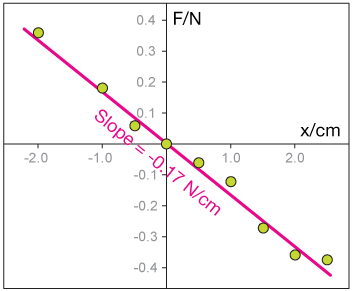 This is a nice way to visualize the data. Notice that there is some "noise." That's normal; no measurement is without some degree of random error. We have to expect it. We can also see from the graph that there is a clear relationship between Force and spring length because the data is well-correlated.

The best way to calculate the slope in this case is to perform a linear least-squares fit, which can be done on a calculator or spreadsheet. On a spreadsheet it's often called a linear trend line. Doing that with this data yields k = 0.17 N/cm.

A certain coil spring requires a force of 4.5 N in order to compress it from a length of 40 cm to 35 cm. Calculate the spring constant, k.

: We can write Hooke's law in terms of absolute values:

That way we don't have to be concerned with signs. We know that by convention a compression is a negative change in the spring length x, and, because k is negative the force of extension of the spring will be positive.

SI stands for Système international (of units). In 1960, the SI system of units was published as a guide to the preferred units to use for a variety of quantities. Here are some common SI units

Two springs are attached to a block as shown. Calculate the force required to compress both by 10 cm.

Now it's a straightforward calculation of the force using Hooke's law and the displacement, |Δx| = 10 cm.

The force required to compress or extend multiple springs is just the sum of the forces to compress/extend each spring individually. In this arrangement, the springs are said to work in parallel.

A mass is attached to two springs as shown. The spring on the right is compressed 20cm from its natural length. Calculate the force required to move the mass 10 cm to the left, at constant velocity.

The force required to compress the spring on the left is

Now the net force required to make the move is the sum of these two forces,

Two springs, with spring constants k1 = 200 N/m and k2 = 100 N/m are attached as shown. Calculate the amount of force required to compress the springs by 10 cm.

: This situation is a little tricky. Obviously, we'll compress the spring with the lower k a little more than the one on the left, but by how much?

It turns out that springs in series can be treated like parallel resistors in an electric circuit. The combined spring constant is the reciprocal of the sum of reciprocal force constants:

So the force constant of this combined spring is

Now that makes some sense, if you think about it. The spring combination is weaker than the weakest spring because when they're coupled together and compressed, the stronger spring still can give a little bit when the pair is compressed.

Now to find the force we just use Hooke's law:

When n springs are arranged in series (one after another), the spring constant for the arrangement is

The potential energy of a spring

The potential energy of a spring is

If you know a little bit of calculus you can see in the section below how we derive that formula. The graph shows PE plotted vs. x for both negative and positive values of x (compression and extension). Study it for a bit. Notice that as the spring is further compressed or extended, the amount of potential energy it stores increases as the square of the distance.

Check out the animation below, too. The horizontal line marks the natural length of the spring/mass combination, the point at which PE = 0. 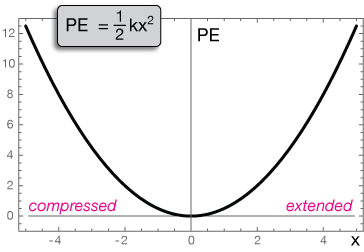 When the spring changes direction at its most compressed point, it begins to exchange PE for kinetic energy (KE), until it reaches its natural length, at which PE = 0 and KE is equal to the maximum PE gained in compression. It's the same for extension. Follow the cycle a few times to make sure you get it.

The potential energy (PE) of a spring is equal to the work done against a force from a point xo to a point x. The PE is the integral of force between xo and x:

If we integrate the Hooke's law force,

(I'm just doing the indefinite integral) we get:

So we have the potential energy of a spring:

Now, of course, the force is the steepness of the potential energy curve, or its slope – its first derivative:

The derivative of the Hooke's law potential energy gives us back Hooke's law:

The negative signs here arise from our sign convention on pushing on and pulling against a compressed or extended spring.

Without friction or other resistance, a harmonic oscillator will continue oscillating forever. The graph of position vs. time for such an oscillator might look like this: 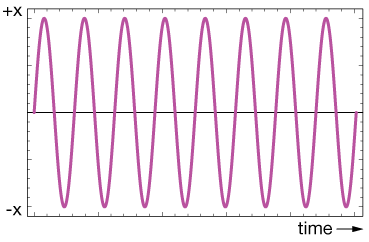 The graph shows that the spring oscillates between a length of +x to a length of -x over time. The motion is periodic, tracing a repeating curve that looks like a sine wave (That is, in fact, what's plotted in the graph).

In reality, no oscillator can go on like that forever. There is always some friction or opposing force which we usually refer to as a damping force.

With a damping force, the curve looks like the one below, and the system is referred to as a damped oscillator. 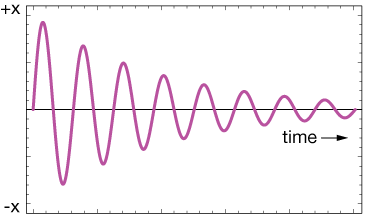 The harmonic oscillator model can be applied to several physical situations to give us insights into the motion, including