How organisms store and use energy

All cells, and therefore all living things made of cells, need energy in order to be alive and to stay alive. Different kinds of cells have evolved different approaches to the problem, but there are some basic similarities. Energy has to be acquired. It has to be stored be available to be used when needed. There are short- and long-term options for energy storage. It's the short-term one that we'll mostly be concerned with in this section, and it's called cellular respiration.

To begin thinking about how cells acquire, store and use energy, we should first ask what energy is. You might find it helpful while reading through what follows to go to the physics notes and read up on thermodynamics.

The energy used by cells is mostly the kinetic energy (the energy of motion) of electrons in the bonds of molecules.

In order to make a chemical bond, energy is required to shuffle electrons around, to get them in the right configuration to form a stable bond. That energy is then said to be "stored" in the bond. It's that stored bond energy that cells extract from food, store in other kinds of bonds and use for functions that require energy.

Energy storage in bonds is a bit off the mark, however. It actually requires energy to both make and break any bond. Where we come out ahead – where we gain energy in a process, is when the sum of energy put in to breaking and forming all bonds on the reactant side of a chemical equation is less than that sum on the product side. It's about differences.

To understand the flow of energy in a biological system, we need to review the concept of "free energy", or as it's called in thermodynamics, the Gibbs energy. The Gibbs energy is defined below in terms of enthalpy, temperature and entropy.

The Gibbs energy, or Gibbs "free" energy is

where ΔG is the Gibbs energy, ΔH is the enthalpy change (ΔH = Hfinal - Hinitial) and TΔS is the Kelvin temperature multiplied by the entropy change (ΔS = Sfinal - Sinitial).

When ΔG < 0, a process or reaction is spontaneous – it will occur on its own.

The Gibbs energy, like many quantities we use in thermodynamics, can't be measured directly. But on a relative scale we can measure ΔG, the change in G. That may seem strange, and a lot of things about thermodynamics are strange at first, but hang in there. For any spontaneous reaction (a reaction that will simply occur if reactants are

brought together), ΔG < 0 (is negative); for chemical processes at equilibrium, ΔG = 0; and for nonspontaneous processes, ΔG > 0.

Enthalpy (H) is only a little more complicated than the treatment I'll give it here. I'm going to make the simplification that at constant pressure (which we'll assume to be the case in most biological situations), the change in enthalpy of a substance (ΔH) is just the change in its heat content.

For any given reaction, when the enthalpy of products is greater than that of reactants, it will take added heat energy to get the forward reaction to proceed. That's called an endothermic ("heat to self") reaction. At first glance, it might seem like no endothermic reaction could possibly be spontaneous (we have to add heat), but a spontaneous process can remove heat from its surroundings just fine. ΔH is defined as the enthalpy of products minus the enthalpy of reactants: ΔH = Hf - Hi, so for an endothermic reaction ΔH is positive. (I'm using "f" and "i" to denote "final" and "initial" here.) 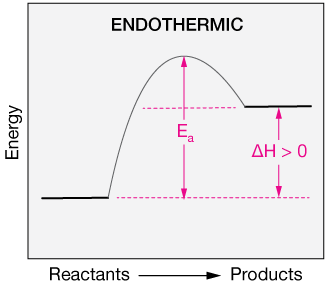 As an exothermic reaction proceeds, it loses heat to the surroundings: Hf < Hi. The first law of thermodynamics requires that energy be conserved, so any energy not present in the reactant(s) but not the product(s) will have to be lost to the surroundings.

Any energy released in the breaking of a chemical bond can be captured in the formation of another bond (although a little is always lost); that's a big part of cellular respiration.

Clearly, the spontaneity of any reaction can't be determined by its enthalpy change (whether its endo- or exothermic) alone. We need some more information, and that's the entropy.

Entropy (S) is a measure of disorder. We call the change in entropy ΔS. The second law of thermodynamics says that the universe always tends toward a state of disorder: ΔS ≥ 0. Order can be brought to one part of the universe only by increasing the disorder overall. For example, when you use your freezer to freeze ice, you are creating order from the relative chaos (lots of internal motion) of liquid water. The price you pay for that is that the heat you removed from the water is ejected into the room that contains your freezer (that's the heat you feel coming from it), causing more random thermal motion of the atmospheric gases in the room.

The third law of thermodynamics sets the state of zero entropy at 0K, the temperature (which cannot be reached) where all motion (therefore any possibility of disorder) stops.

You are already familiar with many entropy-driven process.

For example, when you let some gas out of a container in which it was compressed, it will expand to fill its new container – perhaps a room. It will never do the opposite, spontaneously.

Think about cleaning your room. It never seems to take any effort to mess it up, but it takes a lot to reorganize. Then it gets messy again. That's entropy in action.

The more a chemical reaction leads to disorder the more likely it is to be spontaneous; that is, the higher and more negative is its ΔG. The larger |ΔG| is, the more usable energy we can extract from a reaction.

Two criteria for extracting a lot of usable energy from a reaction:

All of the energy used by most kinds of cells is derived from the sugar molecule glucose (also called dextrose). In a somewhat involved process, the cellular chemistry takes glucose apart, bond-by-bond, extracting its bond energy at each step. My colleague Kate K. says that glucose is "repeatedly mugged" for its energy.

The figure below shows that this dismantling of glucose is energetically favorable (ΔG < 0) both because it is exothermic and because it takes one highly-organized molecule apart, and converts a total of 7 molecules (one glucose and six oxygen molecules, O2) to 12 separate simple molecules. That means ΔH < 0 and ΔS is large, so ΔG is large and negative. (ΔG = -2880 KJ/mol of glucose) 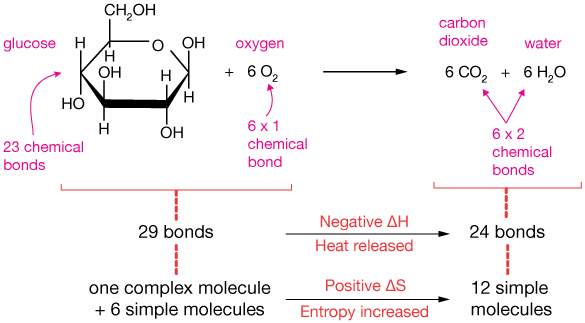 Notice that consumption of one molecule of glucose requires 6 molecules of oxygen. That's why we need to breathe in O2 and why the degradation of glucose is called oxidation. Carbon dioxide — what we exhale — and water – what we pee and sweat away – are given off in the process.

Now we need to figure out the details about how glucose is torn apart and harvested for its bond energy.

In what follows, we will have to refer to a few molecules that carry energy or excess electrons from place to place in cells. One is ATP →. You can click the image to learn more about ATP.

The important energy carriers are: 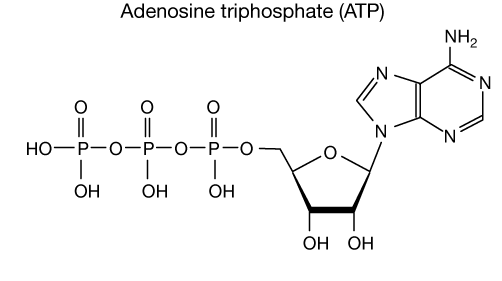 Here is an overview (table and following figure) of the process of storing the energy of one molecule of glucose in about 30 molecules of ATP. The steps in the process are:

Each of the steps above are explained in detail in the sections below. Many portions of the images that follow include click-able links for further explanation. What is now commonly called the citric acid cycle used to be called the Krebs cycle. 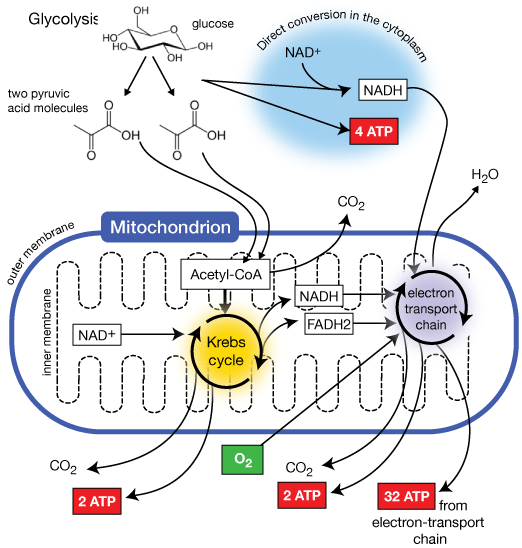 Glycolysis is the initial step in cellular respiration, and in some simple cells, the only one. Glycolysis is the cleavage of glucose, a six-carbon sugar, into two three-carbon pyruvic acid molecules.

Getting the process going requires the energy stored in two molecules of ATP. We think of those as "priming the pump".

In a the later stages of glycolysis, four ATPs are formed and two electrons are transferred to the electron-carrier Nicotinamide adenine dinucleotide (NAD+). The net gain of the reaction is two ATPs and 2 NADH molecules.

Note that the process shown here is a very simplified schematic version of glycolysis. In fact, there are several more intermediate steps and ten different enzymes are involved.

Glycolysis transforms a glucose molecule into two pyruvic acid molecules and produces a net gain of 2 ATPs and 2 NADH molecules.

The citric acid cycle is like a machine that goes round and round, stoked each time by pyruvic acid molecules from the glycolysis process.

One carbon of the 3-carbon pyruvic acid is first removed by an enzyme as a CO2 molecule. This 2-carbon compound binds to a molecule called co-enzyme-A, which binds it to a 4-carbon compound. The resulting 6-C compound is enzymatically converted to citric acid. Citric acid is then systematically decomposed to smaller molecules, releasing energy that is trapped in the ADP →ATP conversion, but also by NAD+ to form NADH and FAD to form FADH2.

The resulting four-carbon compound is recycled to be bonded to the next incoming 2-C compound that comes from the next incoming pyruvic acid ... and the cycle goes on. Many enzymes are needed to efficiently carry out all of the reactions that occur in the citric acid cycle.

The citric acid cycle decomposes pyruvic acid, obtained through glycolysis of glucose, to form one ATP, 3 NADH and one FADH2 molecule. 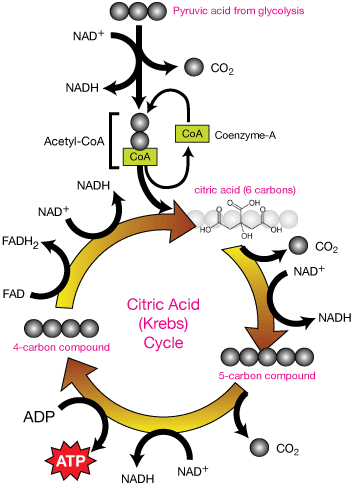 The electrons absorbed by NAD+ and FADH are converted to ATP in the electron transport chain (below). Much of the CO2 gas generated by cellular respiration is made in the citric acid cycle.

Mitochondria are the power plants of the cell. Each mitochondrion contains an inner chamber separated from the main compartment by a curly membrane — to give it lots of surface area. NADH and FADH2 are transported to the inner chamber, where they are oxidized (induced to give up an electron—the one they got in the citric acid cycle). Those electrons drive intra-membrane proteins called proton pumps, which (as the name suggests) pump protons from the inner compartment to the outer one.

The resulting imbalance of protons across the membrane creates a gradient that drives protons to move back across (think osmosis), but they can only do so by moving through another intra membrane protein called ATP synthase, actually a complex of proteins. When a proton passes through the ATP synthase complex, it converts an ADP molecule to ATP. It's a fairly mechanical process; the complex actually turns on its axis each time a proton moves through. 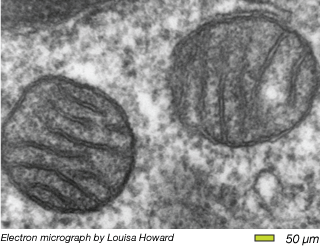 Mitochondria contain everything necessary for them to live on their own, outside of eukaryotic cells. They contain ribosomes and their own DNA. One theory about their origin is that they entered primitive eukaryotic cells and struck up a symbiotic relationship. The ability to manufacture relatively large quantities of ATP is good for the host cell and the mitochondria receive the protection of the outer cell membrane in return. Mitochondrial DNA is passed to all humans via the mother, while only half of nuclear DNA comes (randomly) from the mother.