You should know something about oxidation, reduction, oxidation numbers and redox equation balancing before learning the material in this section. It's all key information that you'll need before moving on.

Electrochemistry is the study of how redox reactions can be used to construct useful tools, like batteries and electrolytic cells.

You should already know how to balance redox reactions.

In this section we'll discuss how batteries work to create an electromotive force (EMF), or voltage (V).

Batteries allow us to simply channel the transfer of electrons in a redox reaction through wires so that the resulting electric current can be used to do useful work, like power a circuit or a motor.

We'll also discuss how batteries can essentially be run in reverse to electrolyze compounds. A good example is the apparatus used to split water into hydrogen and oxygen using electric current.

And finally, we'll have a look at fuel cells and how they work to produce useful electricity.

Electrochemistry also helps us to do things like understand and control the process of corrosion, plate metals on surfaces, and monitor blood glucose levels, among many other applications.

Battery technology is a very hot field, and is likely to be one for some time. In general, batteries are heavy and don't last as long as we'd like them to. Those two properties couple to make current battery designs the limiting factor in things like the range of electric automobiles and the size and heat-dissipation properties of battery-powered electronic devices. If you could be the one to develop a smaller, lighter, more energy-dense battery at a low cost, you'd be rich!

In a battery, we run a redox reaction in such a way that the oxidation and reduction half reactions are carried out in separate containers. In this way, the electrons that move from the oxidized species* to the reduced species can be made to travel through a wire and to do useful work, like power a phone.

We'll construct a battery below using two beakers, but the two half reactions can be separated in a variety of ways in real batteries. We'll go over some of those later.

Many different electrochemical reaction systems (combinations of half-reactions) are used in modern batteries. We'll look at a very simple one below, but you might also be aware of the lead-acid batteries used in most cars and the lithium-ion batteries used in many electronic devices like cell phones.

This will be our first battery because it's relatively simple. The balanced redox reaction is

The oxidation half reaction is

and the reduction half reaction is

Two electrons are transferred in each reaction. Here is a diagram of the setup. You could easily build one in the lab:

The Volt (after Alessandro Volta) is the SI unit of electromotive force, the potential difference needed to push 1 Ampere of electric current through 1 Ohm (1 Ω) of resistance.

Think of a volt as the unit of force that pushes electrons through wires. The higher the voltage (which really ought to be called "potential") the greater that force. 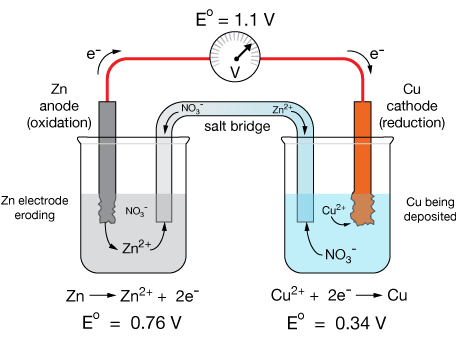 Let's begin with the electrodes. Immersed in each solution is a solid electrode, zinc (Zn) on the left, and copper (Cu) on the right. In a battery, oxidation occurs at the electrode called the anode, and reduction occurs at the cathode. A wire that conducts electrons connects the two electrodes through a meter that measures either current or electric potential (voltage), usually the latter.

The zinc electrode is immersed in a solution of a soluble salt of zinc, often a nitrate, because nitrate salts are very soluble. In this battery, Zn(NO3)2 is the sink for Zn2+ ions — a place for them to go after they're created in the oxidation half reaction. Likewise, the copper electrode is immersed in a solution of Cu(NO3)2, which provides a source of Cu2+ ions for the reduction reaction.

As the cell is operating, the oxidation reaction removes two electrons from solid zinc atoms, producing a Zn2+ ion. A buildup of Zn2+ ions in the anode solution would cause the reaction to stop because of repulsion of the positive particles, so we must provide them with a way to "leave," and/or to be matched with a counterion (NO3-). That is accomplished with the salt bridge, a solution-filled tube that allows ions to flow freely.

Those Zn2+ ions flow into the cathode solution and are there to pair with excess NO3- ions produced from the reduction of Cu2+ to copper metal, which "plates" onto the copper electrode, making it grow thicker. NO3- ions can also flow through the salt bridge to charge-neutralize the Zn2+ ions formed in the oxidation reaction.

The voltages (Eo) in the diagram will be explained below.

Over time, the terms we use to describe aspects of electric circuits have been garbled. The proper term "potential" or "electric potential" that describes the electromotive force has turned into "voltage." Sadly, it's probably a lost cause to turn that around, but for goodness sake, don't refer to electric current as "amperage," and don't refer to electrical resistance as "Ohmage." That's just bush-league stuff.

Each half reaction has a characteristic potential.

Each kind of redox half reaction — there are many — produces a characteristic potential or electromotive force (EMF), and these can be measured, though we have to be clever about it. Later we'll use these potentials, called standard reduction potentials or standard electrode potentials to predict which kinds of battery chemistries will work, and if they work, how much potential they will produce.

Measuring the potential of a half reaction is tricky, because we can't just run a half-cell reaction by itself and measure its tendency to push electrons around. Oxidation and reduction must always take place together.

To overcome that problem, we choose one particular half reaction, and arbitrarily set its potential to zero. We choose the reference oxidation half reaction:

Arbitrarily setting the H2 gas oxidation half reaction to a potential of zero doesn't do any harm. We'll always be looking at differences in standard reduction potentials, so whatever the EMF produced by that half reaction, it will always just be subtracted away anyway.

The electrode used for this reference half reaction is called the Standard Hydrogen Electrode (SHE).

The diagram below shows how the SHE can be used to measure the standard reduction potential of the Cu2+(aq) + 2e-   →   Cu(s) half reaction. 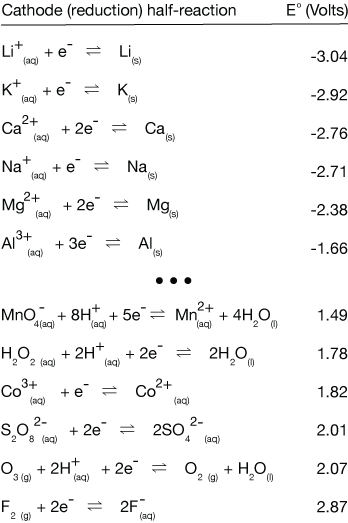 Tabulation and use of SRPs

One-by-one in laboratories, half reactions have been paired with the standard hydrogen half reaction using the SHE, and the results have been tabulated, so you don't need to repeat those experiments. Here is an excerpt from one such table.

Lithium ion, Li+, is the most difficult atom to reduce, and F2 is the compound that reduces most easily when paired with an oxidation half reaction.

: First, the half reaction for the reduction of lithium is negative (and relatively large), which means it has a high propensity to be oxidized rather than reduced. Given that F2 is apparently easily reduced, we should flip the Li reaction around to make it an oxidation. That means flipping the sign of the standard potential to make it a standard oxidation potential.

Now these are mass- and charge-balanced half reactions, so we can multiply the second by 2 to balance the electrons and add them

Although we multiply the oxidation half reaction by two, we do not multiply Eoox by 2, as it is an intensive property of the reaction, not an extensive one. The balanced redox reaction

Effectively, we've just subtracted the standard reduction potentials, which removes any trace of the potential of the SHE, so it was appropriate to set it to zero V.

An intensive property, like boiling point does not depend on the quantity of material.

An extensive property like mass depends on how much material you have.

The cell potential is the sum of the standard reduction potentials, one written as an oxidation, which means flipping (multiplying by -1) its sign.

If the cell potential is positive, the reaction is spontaneous and the battery will work.

If the cell potential is negative, the reaction is non-spontaneous and the battery will not work.

: The standard reduction half reactions and potentials are

Now it is possible to arrange a battery, or cell, in two different ways. One is to change the mercury (Hg) reduction to an oxidation. But it's easy to see that this arrangement leads to a negative potential, which means that the reaction would be non-spontaneous, and therefore generate no potential at all.

The opposite arrangement, in which we oxidize I- instead of Hg, gives a sum of standard potentials that is positive, Eo = 0.31V. This would be a spontaneous reaction leading to a cell potential of 0.31 V.

The overall redox reaction for the cell is an easy one to balance:

Form all possible spontaneous electrochemical cells (batteries) with these half reactions. Calculate the cell potential of each and balance the redox reaction. 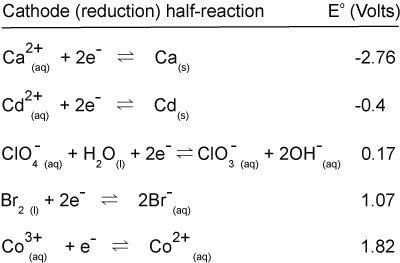 It is possible to run a non-spontaneous electrochemical reaction by applying an external potential (voltage) using a battery or power supply. In this way we can achieve things like decomposing compounds (like splitting water into hydrogen and oxygen, (electrolysis, below), or electroplating, deposition of layers of metal atoms onto various substrate surfaces.

Let's begin with electrolysis. The overall reaction is

A look at the oxidation numbers,

shows that water is both reduced and oxidized in this reaction:

These will be the balanced oxidation and reduction half reactions we'll use in the electrolytic cell below.

We can recover our overall equation from the half reactions by multiplying the reduction half-reaction by 2 (to balance the electrons between the two half reactions, and adding (noting that H+ + OH- → H2O).

The half-cell potentials of the half reactions, as written above, are E˚ = -1.23 V and E˚ = -0.83 V, respectively, making this a non-spontaneous cell overall. We can, however, drive the cell in the direction written by applying an external potential using a battery or power supply.

In the apparatus below, both metal electrodes are submersed in water. Because the products, H2 and O2 are gases, two inverted tubes, initially filled with water before inversion, are suspended, one to each, over the electrodes. Any gas evolved at the electrode surface will rise up into the appropriate tube, displacing the water inside. That way, we'll see our product gases forming, and capture them for use later.

When the power supply is turned on, water is reduced at the cathode, the negative terminal and a source of electrons, and it is oxidized at the anode, the positive electrode and a sink for electrons.

Using electrolysis to deposit thin layers of one metal on another

Very often it is desireable to affix a thin coating of one metal on another. This can accomplish one or more of several goals, including:

This site is a one-person operation. If you can manage it, I'd appreciate anything you could give to help defray the cost of keeping up the domain name, server, search service and my time.